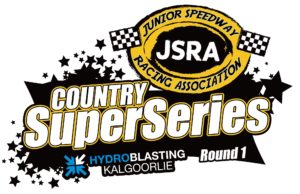 The Junior Speedway Racing Association (JSRA) 2016/2017 season kicked off last night at the Kalgoorlie International Speedway in what was a brilliant spectacle of Junior Sedan Racing.

With a field of five New Star drivers taking to the track for the Hydroblasing Kalgoorlie Round 1 of the JSRA Country Super Series, Luke Malcolm and Lachlan Dellar set the pace early in proceedings winning a heat race each to begin the night. Brother and sister duo of Jhy and Montana Pack continued their strong rivalry from the Winter season and raced hard throughout the heat races. Luke Malcolm would be the first driver to record a second heat win in the third and final qualifying heat before the 15 lap final.

When the final got underway, Malcolm and Dellar continued their battle into turns 1 and 2. Lachlan Dellar would lose ground after making a small mistake, allowing Luke Malcolm to sprint away from the field. Montana Pack took over the running of second place as Dellar and Jhy Pack battled for the minor places. Tilly Leonard also raced hard throughout the night, getting quicker and quicker with every lap. When the checkered flag flew, it was Luke Malcolm who proved too strong for Montana Pack and Lachlan Dellar.

As we have come to expect, the Top Star Junior Sedan did not disappoint the crowd on hand in Kalgoorlie and those listening at home. Blake Webb and Kalgoorlie local Dylan Parkes stamped their authority on the field winning their first two heat races of the night, before Collie’s Seth Hinsey showed he would be a series threat this season, winning his final heat race of the night. Blake Webb would win the final heat of the night and go through to the final undefeated to start on pole position for the 20 lap final.

With 20 grueliing laps ahead, the Top Star Junior Sedan drivers faught hard into turns 1 and 2, with Dylan Parkes getting the upper hand. Jake Avins, Blake Webb and Jackson Derrick would fight for the minor places, while Jacob Potts faught hard with Jayke Malcolm after falling back through the field on the first lap. Throughout the field, there were a number of drivers racing in close proximity with the crowd on watching on eagerly. As the laps wound down, the race continued to excite as the leading drivers raced hard for positions and began racing through lapped traffic. The race went 14 laps without a stoppage before Daniel Erceg found himself facing the wrong way in turn 2.

The field now closed up for a nose to tail restart, with Dylan Parkes leading away from the restart for a small time as Jake Avins made his move in turn 1, moving underneath Parkes and taking the lead. Dylan Parkes then dropped back behind Jacob Potts who moved into second place and started to look for the lead as the leading trio raced three wide. Blake Webb now started to make his move on Dylan Parkes who ran wide coming out of turn 4.

As the white flag came out, Jacob Potts tried his best to make a pass, however Jake Avins would hold on and take the first round victory of the series ahead of Jacob Potts, Blake Webb, Dylan Parkes and Blake Fletcher. A post race relegation would see Blake Webb relegated 2 positions for contact during the race, elevating Dylan Parkes to third position and Blake Fletcher to fourth.

The JSRA must also thank Kalgoorlie International Speedway for holding the opening round of the JSRA Country Super Series and Allen and Michelle from Hydroblasting Kalgoorlie for their massive support of this round.

Attention will now turn to Round 1 of the Metropolitan Series, which coincides with the Shannons Fast Racing Series event at Perth Motorplex on October 29th. The next JSRA Country Super Series round will be at Makit Hardware Narrogin Speedway on Saturday November 5th.