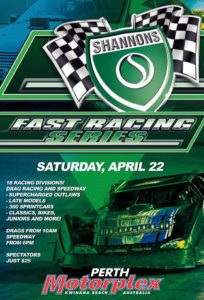 The final round of the JSRA Metropolitan Series has come to a close at the Perth Motorplex last night with a sensational display of driving from all Junior Sedan competitors.

Heat one of the evening would see a very slick track surface, which caused chaos throughout the field with a number of drivers making contact with the concrete wall at some point in the race. Jackson Derrick who along with Blake Webb were fighting for the Perth Motorplex Track Championship and the JSRA Metropolitan Series started his night with a win in the opening heat. Bryden Southwell would score an easy win in the New Star Juniors, followed by Jade McKeagg.

The second heat would see a great race for the lead between Blake Webb and Jake Avins who raced side by side for a number of laps right up until the last corner, with Webb defeating Avins by the smallest of margins. Izak Davies would have a great battle with Mitchell Bosveld for the minor places, while Bryden Southwell would win his second heat of the night.

The final heat of the night would see Blake Webb run away to victory for the second time of the night, with Jake Avins again finishing second ahead of Jackson Derrick who was trying all so hard to get to the front of the field. Luke Malcolm would charge to victory in the New Star field, a great result after hitting the concrete wall earlier in the night.

Blake Webb and Jake Avins would start on the front row for the last feature race of the season, with Webb immediately taking the lead. Jake Avins and Jackson Derrick would have a brilliant race for second and third, with Izak Davies and Mitchell Bosveld battling for fourth and fifth. Luke Malcolm got off to a strong start in the New Star division, with Bryden Southwell following behind.

With the laps winding down, Blake Webb continued his strong run and would hold on to take the last win of the season, which also secured the Perth Motorplex Track Championship and a new 12 lap record ahead of Jake Avins and Jackson Derrick. Luke Malcolm would defeat Bryden Southwell and Jade McKeagg in what was a great final night of racing.

The final results of the JSRA Metropolitan Series will be announced at the JSRA Presentation Evening on Saturday May 27th following the final round of the JSRA Country Super Series at Pithara Speedway on May 13.