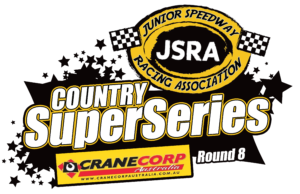 Night 1 of the Easter double header at Augusta-Margaret River Speedway, including the Round 8 of the JSRA Country Super Series, proudly supported by Cranecorp Australia has come to a dramatic end with a scary crash last night.

The event which doubles as the KJB Fabrication Junior Sedan Championships saw 24 of the best Junior Sedan competitors take to the south-west venue, ready for a big weekend of racing.

To get the night started, the New Star Juniors raced extremely hard with a few incidents bringing on the yellow lights on numerous occasions. When the racing did get underway, free of stoppages, the racing was a brilliant spectacle and a treat for all of those watching on. South-west racer Aidan Doak started in the best possible way, winning comfortably from Matthew Thomson and Montana Pack.

Jackson Derrick would race away from the field in the opening heat of the Top Star Junior Sedans to win comfortably from Jake Avins and Blake Fletcher, while Izak Davies’ weekend would come to a premature end suffering mechanical dramas yet again.

The second heat would see Jake Avins and Izzac Delaporte jostling for positions throughout the race until lap traffic would see Avins get caught up, with Izzac Delaporte taking the victory ahead of Avins and Blake Fletcher, who was having a great night until this point.

The third heat of the night for the Top Star Juniors would see one of the scariest crashes of recent times, when Blake Fletcher made slight contact with another car, which then saw him fly into the pit gates, before making contact with the corner of the concrete wall and pit area, this then sending him back through the pit gates before coming to a rest on his side in the pit area (see picture below).

Luckily Blake was able to climb from the car, which suffered very little damage, though the pit gates were severely damaged, which brought the night to a premature end. The Augusta-Margaret River Speedway has worked hard over night to repair the gates ahead of tonight’s racing program.

Racing will get underway from 5pm WST tonight to decide the winner of Round 8 of the JSRA Country Super Series. All results will be on the JSRA Facebook page and website.