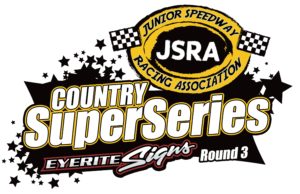 Jake Avins and Bryden Southwell have recorded their second round victories of the JSRA Country Super Series by winning Round 3 of the series at Albany’s Attwell Park Speedway, supported by Eyerite Signs.

With seventeen Top Star Junior Sedans ready for the night of racing, the racing as we have come to expect from the Junior Sedans was held at a hectic pace. Blake Webb and Jake Avins began the night in the best possible way, by winning their first heat of the night.

Jake Avins then continued in his winning way, recording his second victory for the night, defeating Peter Katona and Blake Fletcher. Jacob Potts would defeat Jayke Malcolm in their second heat race of the night ahead of Blake Webb.

Jake Avins and Jacob Potts would start the twenty-lap feature race from the front row and would fight hard for the lead for a number of laps with Jorj Park close behind and looking for a way past. Further back in the field, the race was well and truly on in earnest with numerous drivers racing side by side to gain position.

With the lead changing on a variety of occasions between Avins, Potts and Park, Jorj Park would take the lead before the yellow lights would come on for Brooke Watson who stopped in turn 3. At this point, officials deemed that Jorj Park made a pass on the infield and relegated him back two positions.

With twelve laps remaining, the race for the lead would continue, with Blake Webb now moving into the battle. Jackson Derrick started his charge through the field, dicing with Jayke Malcolm, Peter Katona and Alex Fraser. With the laps winding down, Jacob Potts and Jake Avins continued their battle, swapping positions a number of times. Alex Fraser continued to race hard with Jackson Derrick, before he retired from the event.

Broome duo of Blake Webb and Jorj Park fought hard for the minor positions, as the leaders continued to race hard for the lead. As the white flag came out, Jacob Potts closed up behind Jake Avins and started to apply immense pressure as they moved around the track for the final time. This would be too late, as Jake Avins went on to record his second round victory of the 2016/2017 JSRA Country Super Series ahead of Jacob Potts and Blake Webb.

In the New Stars, a small yet quality field of eight cars faced the green flag and put on a great show throughout the night, with close racing in each of the heat races and the final.

The final heat of the night would go the way of Bryden Southwell, who would defeat Luke Malcolm and Montana Pack to start from pole position in the fifteen lap final to follow.

The final race got underway with an even dispatch between Southwell and Malcolm, but Jhy Pack quickly moved to the inside to take the lead through turns 1 and 2. Bryden Southwell was relegated back to third, before Luke Malcolm would all but spin out in turns 3 and 4, losing a couple of positions.

Bryden Southwell now started to charge after the leader Jhy Pack with Albany local Mitchell Claybrook sitting in third position. Southwell soon made a clean pass on Jhy Pack and took the lead as the field continued to circulate around the Attwell Park track. Jhy Pack started to get busy behind Bryden Southwell, as Luke Malcolm started to close the gap between himself and the leaders, as did Montana Pack.

At the half way point, the race was anyone’s to win, with Jhy Pack and Bryden Southwell racing side by side for the lead, with Luke Malcolm watching on closely behind before making it three wide momentarily. Bianca Kennedy, Hope Batchelor and Brody Day continued to battle for the minor places further behind as the leaders continued to battle it out.

As the laps wound down, Montana Pack started to make her charge through the field and soon looked to line brother Jhy up for a pass. Mitchell Claybrook would then spin his car in turns 3 and 4, which would force a three lap restart.

When the race got back underway, Jhy Pack gave Bryden Southwell a handy lead, as the white flag came out a lap early. Jhy Pack would have once last effort to take the lead, as Luke Malcolm closed up behind Montana Pack, racing hard for the last step on the podium. In sight of the finish line, Luke Malcolm would lose control in front of Montana Pack, allowing Bianca Kennedy to come from the copwebs and steal a third place finish ahead of Montana Pack, Hope Batchelor, Brody Day, Mitchell Claybrook and Luke Malcolm.

The JSRA Country Super Series will return in two weeks at the Quit Bunbury Speedway for Round 4 of the series presented by Hamon Tyre and Exhaust Centre. This will be a great opportunity for the junior teams to test their machinery ahead of the West Australian Junior Sedan Title at the same venue.

A big thank you must go to Eyerite Signs and the Albany Speedway Club and their sponsors for supporting last night’s round of the JSRA Country Super Series.